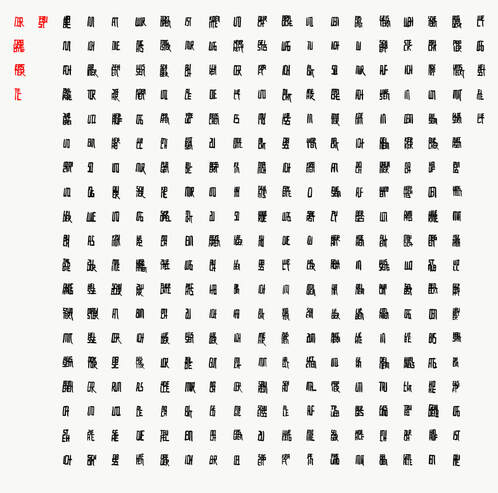 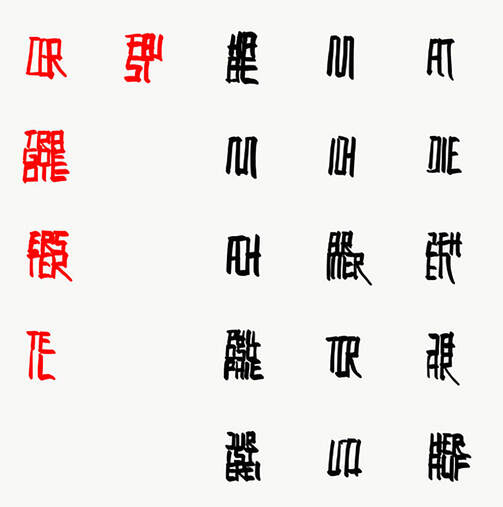 detail "goethe`s faust", kalligraphic interpretation with german letters configured as fake chinese ideographs
this series illustrates my interest in the differences of the chinese and german language. out of autobiographic reasons i am curious about the impact, that language has on culture, mentality and the way of thinking. german language is like a beautiful code in programming compared to a natural description in chinese. the germans are using a highly minimalistic code (26 letters) in order to achieve the maximal potency in describing complex issues with a strict logical structure. once a statement is made, there should be minimal room for interpretation. the chinese language on the otherhand is diverse like nature. there are thousands of different words mixed together to a statement, which leaves almost always large room for different interpretations. 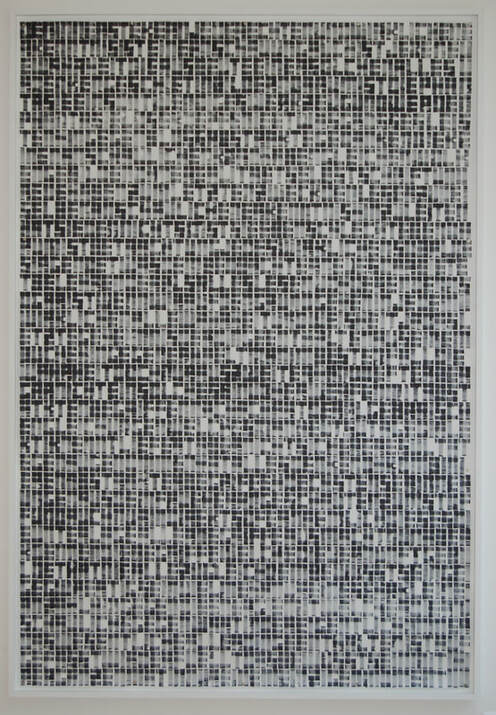 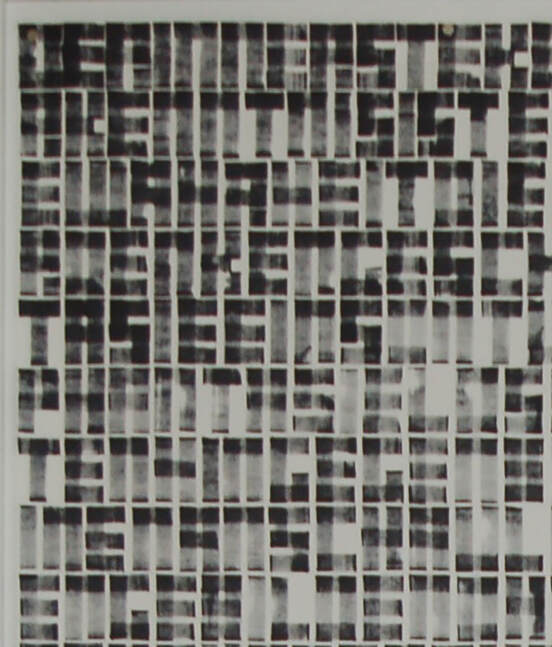 detail "schopenhauer`s aesthetic theory", kalligraphy in maximal reduced german block-lettering to achieve a dissolution of typography into image
schopenhauer describes in this essay what aesthetic experience is all about in contrast to a intellectual one. he is contemplating about the limitations of speech, when it comes to aesthetic perception. and that perception outreaches the limts of speech. by doing so he uses the very same limited medium, that he is talking about. i wanted to illustrate this impossible effort by using the most limited typo -that i could think of- and arranged it in a way, that it could be recognized as an abstract drawing, which then would transform the speech into an image. 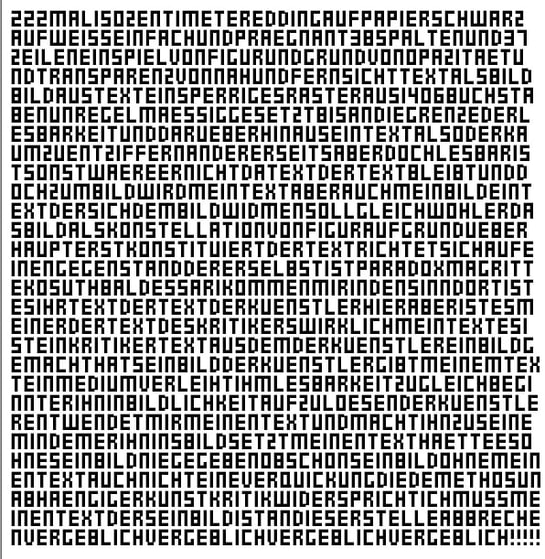 "kritik der kritik", text by art-critic lars blunck, kalligraphic interpretation of a critic`s text and transformation into an artpiece, text-doc with customised typo, 2013
the trigger for this work was a discussion with lars blunck, a professor for art-theory at the art-academy nuremberg. i was not convinced, that it is merely up to the recipient to judge upon an artpiece, not to mention the art-critic to criticise. so i had the idea to intangle him in a paradoxic jointventure. i asked him to write me an art-critic, which i exhibit in my custom-made typo as the art-work. he then philosphised beautifully on the paradoxical character of the word and the image. 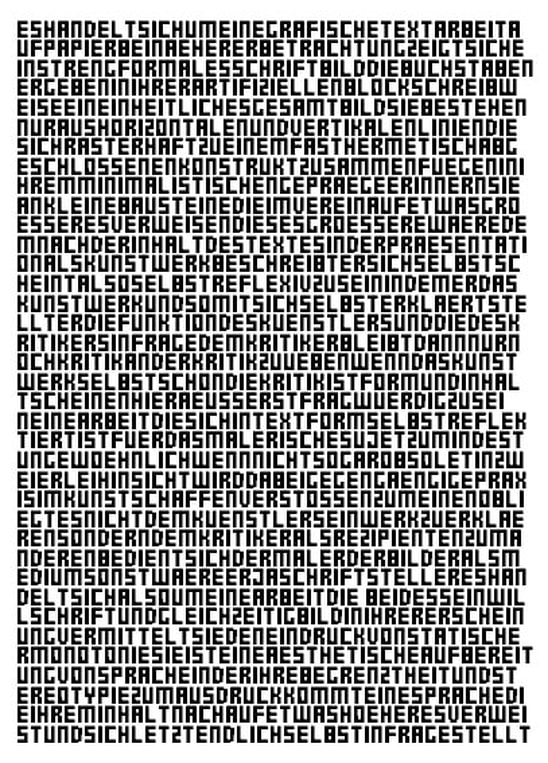 "consequences of selfreflexion", artist`s text about an artpiece, that became the artpiece, text-doc with customised typo, 2013
the work is about the aesthetic result, if an artist is getting too much involved with thinking about, what he is actually doing. 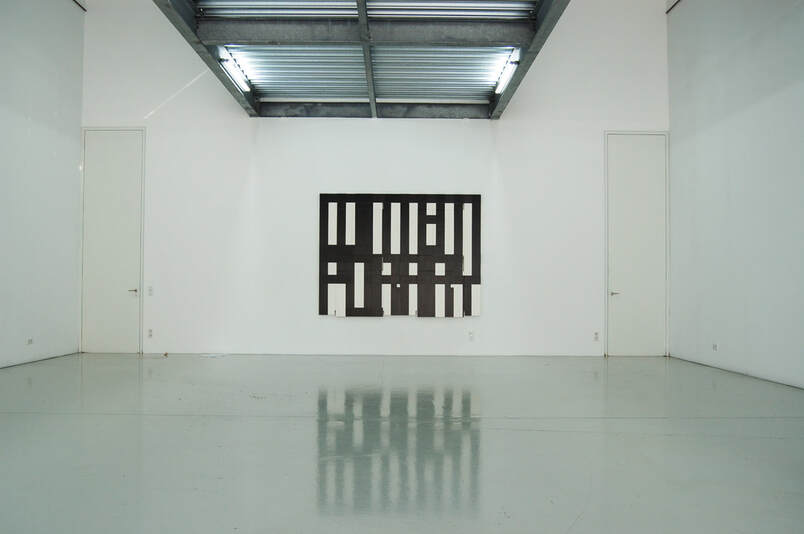 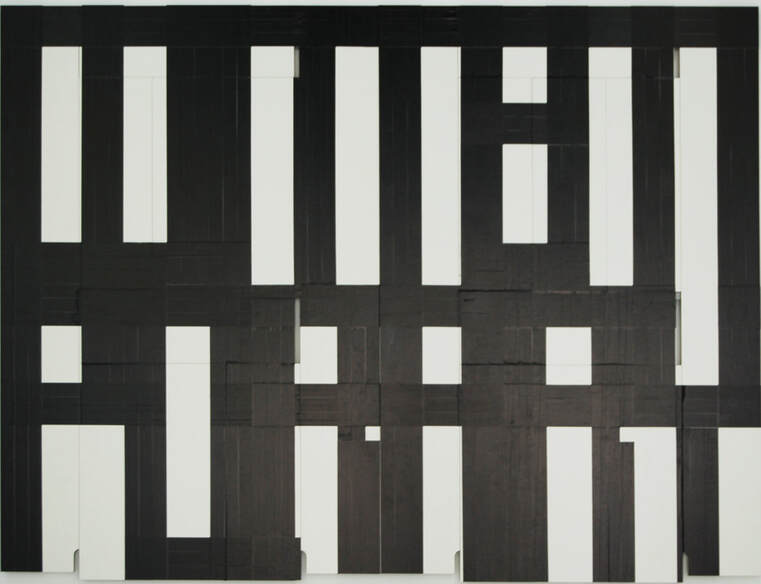 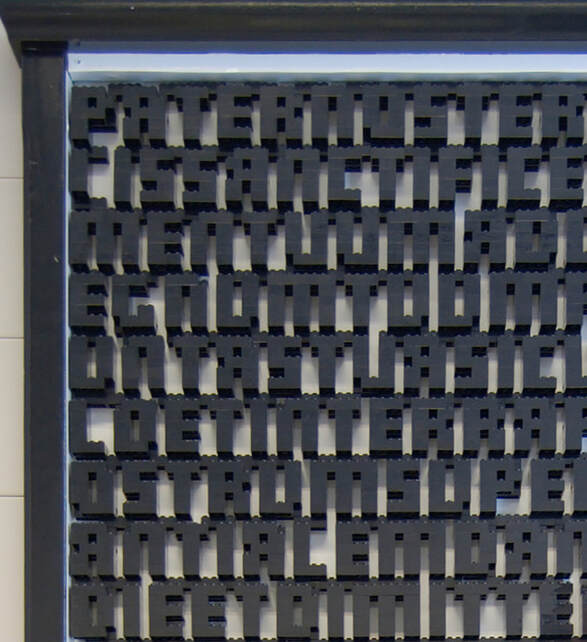 detail "to say ones beads", rosary-prayer in latin, lego-bricks in ikea-bookshelf-frame, 90x200cm, 2015
the classical 2x4 lego brick is used to build up letters, which are assembled to one of the most known texts in the world. the pater noster. it reflects again the simple structure of our language and at the same time its complex meaning as a fundamental part of our society. religion in generell is based on communication. does it not try to explain images of daily life with words and vice versa? is it not confronted with the same impossible endeavor of bringing together, what is not meant to be together, the word and the image, the soul and the body, and so on?
vilem flusser, a communication-scientist, once stated in his book "kommunikologie", that language as medium is coming to an end. and is replaced by the image. its the other way around than in ancient times, when the image was replaced by the word. does this mean, that our way of thinking will also change again? in a way it feels almost like going back to the roots. when you are surfing through the internet by clicking from one link to another, gathering images and sounds provided by the worldwide web as you would be on a safari through the jungle. there are so many impressions, that you can not remember the way, that you came from, your path. is it a coincidence that apples webbrowser is called safari?  the technical approach of our western civilisation was successful in building up a virtual reality, that feels almost real, although it relies on simple elements like numbers, bits and bytes.